We only sell what we catch…

Each boat in our fleet is independently owned. Combined, we catch a variety of lobster, crab, conch and more! (specific types below) At the Shack, you can buy our seafood live (we can pack it to travel up to 24 hours). We can ship it LIVE, overnight, anywhere in the continental US at discounted Fedex rates.  Or, we can cook it for you! Picnic here overlooking the harbor, or bring it home!

We also sell our cookbook, The Fisherman’s Table, packed with our tricks for cooking the seafood we catch. And- we sell gift certificates so your family and friends can enjoy our local seafood as a treat!

Ever wonder why they call a lobster a chicken? Learn the local species lingo!

Reprinted from The Fisherman’s Table cookbook, with permission from Laura Blackwell (author) and Sean Warren (illustrator).

If It’s a Lobster…Why Do They Call It a Chicken?

Local lobsters are all of one species, (Homarus americanus) but there are different kinds. ‘Chickens,’ ‘culls,’ ‘bullets,’ ‘selects,’ and ‘new shells’ are all terms you will hear. The different names refer to size, number of claws, and hardness of shell. ‘Roe’ and ‘tomalley,’ will also come up in conversation. To some they are delicacies. To others, not so much. ‘Sand sacs’ and the ‘dark line running down the middle of the lobster’s tail’ are the only parts that one really shouldn’t eat.

New Shell or Soft Shell
‘New Shells…’ Every so often, lobsters ‘molt’ and create a new shell in order to grow. Just after that molting their ‘new shells’ are quite soft and their meat is very, very tender. These ‘soft’ lobsters do not contain as much meat as their harder peers, but they are easy to peel with just your fingers. Soft shell lobsters are truly a sea-side treat; as they do not survive long outside of the water, they do not get shipped to inland stores.

Hard Shell
‘Hard shell’ lobsters have had lots of time (maybe years!) after molting to get their shells into thick fighting trim. Hammers, nut-crackers, cleavers and pliers are all tools that might be called on to ‘crack’ through to the meat inside. Hard shell lobster meat is more defined and firmer than ‘softies.’ As they can survive for a long time out of the ocean, they are widely distributed in non-coastal regions.

Chickens
‘Chicken’ lobsters or ‘Chix’ are generally the smallest legal size (though, lobster ‘size’ is actually measured by the length of the carapace, rather than weight). They weigh under 1¼ pounds and are often sold at a different rate than bigger lobsters as they yield less ‘meat per pound’ than a lobster with the same amount of body, but bigger claws and tail.

Culls
‘Culls’ are lobsters with only one claw. New England lobsters are a contentious bunch (think Red Sox vs. Yankees). Fighting is part of the game and sometimes claws come off! Lobsters generally have two claws: the ‘crusher’ (big and blunt) and the ‘cutter’ or ‘shredder’ (small and sharp). Each claw does what its name says. Lobsters are able to regenerate their claws during their next molting. Culls can be missing either claw.

Bullets or Tails
‘Bullets’ or ‘Tails’ are lobsters who have lost both claws. They flock to lobster traps for meals they can get without their hands.

Selects
‘Selects’ are ‘Grade A,’ nice looking lobsters – generally one and a half pounds or more. Big claws, hard shell, lots of meat.

Roe
‘Roe’ are lobster eggs sometimes found at the top of a lobster’s tail meat. Uncooked roe is black. Cooked it turns bright, bright orange. It is considered a delicacy.

Tomalley
‘Tomalley’ is the greenish stuff inside the lobster’s body. It might not be the healthiest thing for you, but is packed with lobster flavor. Using a little of it in stocks or sauces packs a salty lobster punch.

Sand Sacs
‘Sand Sacs’ are actually the lobster’s stomach, located right behind the eye sockets. They are easily pulled out and should be discarded.

The Exit
‘The dark line running down the middle of the lobster’s tail’ is exactly what you think it is. We throw that out too.

Local crabs aren’t ‘Deadliest Catch’ huge. They tend to be between 4-7 inches wide yielding about ¼ cup+ meat each, depending on whether or not you are an experienced ‘picker.’ Sand Crabs, Rock Crabs (aka Jonah Crabs) and Blue Crabs are all edible and reside locally, though Blue Crabs do not exist in significant numbers.

RI Sand Crabs (Cancer irroratus) have coveted sweet meat and smaller claws than their rocky brothers. They are generally no more than 5 inches wide at the carapace (body). On each side of the eyes, there are nine vestigial ‘teeth’ or bumps at the edge of the shell. (See illustration, left.) They are primarily a ‘bay’ or ‘in-shore’ catch. 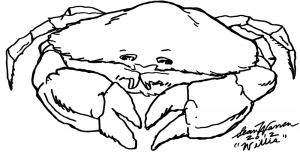 RI Rock Crabs or Jonah Crabs (Cancer borealis) have meat that is a little less sweet than their sandy brothers, but their claws are big, making for easy picking. They can grow to be larger than 8 inches wide and prefer deeper water. The carapace edge to either side of the eyes is smooth, distinguishing it from a ‘Sand’ crab. (See illustration, left.) Many summer in-shore lobstermen fish these ‘Jonah crabs’ off-shore in winter.

What's the difference between them, and which do I want?Enough about Crabs!

We Have Conch Here?

Surprise – Rhode Island’s waters are filled with conch! Unlike flashier lobster and Striped Bass, conch doesn’t get much room on local restaurant menus. This could be due to the time it takes to cook (a bunch) or because they have only recently begun to be commercially fished. Local conch is important in Italian cooking (known as ‘scungilli’) and in Asian culture, often served raw. It is a chewy, lean meat, similar to the foot of a clam but completely sand free!

Though we call them ‘conch’…the ‘conch’ caught around Aquidneck Island aren’t actually conch. 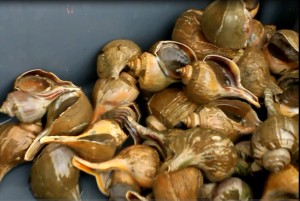 Their true name is ‘channel whelk’ (Busycotypus canaliculatus) but everyone calls them conch. True conch or “Queen Conch” are vegetarians and live in warmer waters (think Bahamas and pink shells…). Our ‘conch’ are gray carnivorous little suckers. They live along the bottom of the ocean and show up in lobster traps all the time.